In this article I am going to breakdown some of my previous professional experiences in developing and using personal build systems, that enforced robust sanity checks on code submitted to mainline repositories of large multi-team projects

During my time at Splash Damage, I was involved in developing the "personal build pipeline" that has since been highlighted in a talk presented by Valentin Galea, former Technical Director at Splash Damage. You can check out the slides from that presentation here.

For most of my professional career, I've made use of a continuous integration system called TeamCity. It's a closed-source, flexible, user-friendly build and automation system developed by JetBrains. It comes shipped with a wide range of server-sided plugins, including a vendor-supported plugin for running personal builds.

Links to documentation about Personal Builds with TeamCity, and it's servers-sided Remote Run plugin can be found here:

We made use of these set of vendor supported tools for creating a personal build pipeline, whereby changes made locally on the user's machine, were tested on a remote build machine for verification purposes.

The "personal build pipeline" that I developed was contingent on there being a few tools available.

You can read more about the personal build pipeline from the UnrealFest presentation here.

The Personal Build Tool is a desktop application responsible for aggregating local changes in a Perforce workspace, submitting those local changes directly to the TeamCity server, and subsequently triggering a new build on TeamCity with the submitted changes. The local changes would be applied on top of the head revision of the repository checkout from mainline.

TeamCity exposes some of its functionality through a HTTP based "RESTful" API. This REST API is used in conjunction with the Remote Run plugin to perform a few tasks including:

Information on the TeamCity REST API can be found here.

This command-line tool enables a user to specify one or more local files, a build type configuration ID, along with additional parameters (optional), and then submit those changes directly to the TeamCity server for starting a new personal build.

In order to achieve this, the command-line tool constructs a "patch file" which comprises of the user's local changes, along with additional metadata that enables the build system to understand where the files are to be placed in relation to the Version Control System (VCS). In this instance, the VCS was Perforce

The patch file is a simple binary file that consists of metadata, and the raw contents of local changes from the user's machine. The local changes included in this patch file is what the build system will use, on top of the existing head revision from the mainline of the code repository in the VCS (in this instance, Perforce). The goal of this entire system is to prevent the user from submitting local changes into the repository without first verifying whether or not those changes would compile successfully in a "live" build system environment (e.g. a machine not belonging to the user). This is the entire premise of the personal build system.

The structure of format specification for this patch file are unfortunately not documented anywhere, and it will require you to decompile the Java-based command-line remote run tool in order to understand how the patch file is constructed. The code itself is relatively simple enough to understand even without prior knowledge of Java.

The patch file consisted of information including the following:

With this knowledge, we were then able to develop a basic serialization mechanism as part of our Personal Build Tool, that was able to aggregate all local changes on the system, and produce a "patch" file that can be used for starting a personal build with. 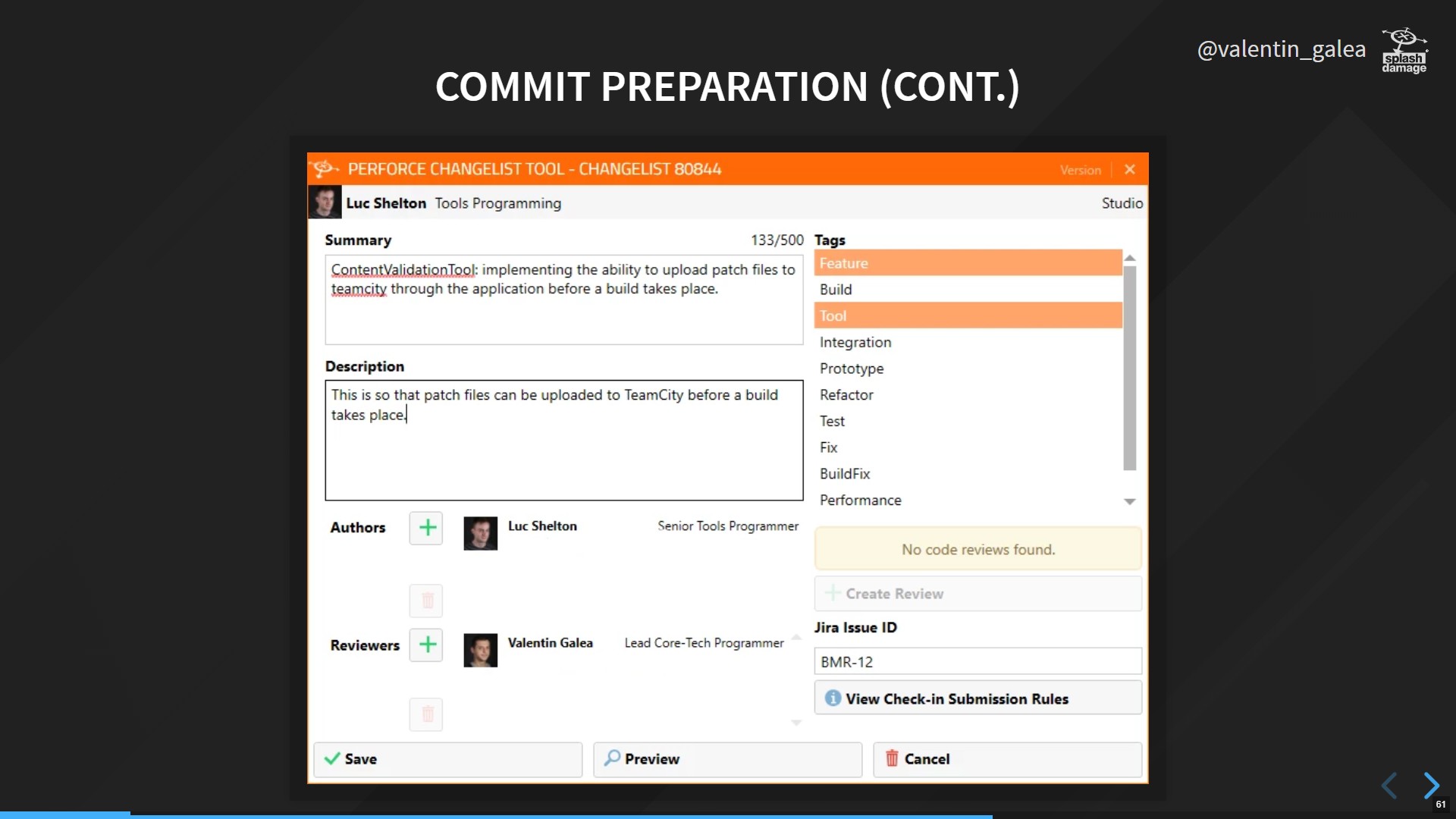 The Perforce Changelist Tool, as documented in the UnrealFest presentation by Valentin Galea from Splash Damage.

The Perforce Changelist Tool is a simple desktop application that is launched from P4V, the GUI application "frontend" for Perforce.

When the tool is launched for the first-time from a context menu, the tool will automatically integrate itself with P4V by locating the configuration files that are available under the following path.

This is an XML based file that gets loaded by P4V upon when the application is started. It provides definitions for custom tools that the client must use, including additional context menu actions that enable you to launch an external application with injected parameters (including the number of a changelist).

The changelist number then gets passed to the Perforce Changelist Tool through a command-line argument (i.e. --changelist 1234), which it then uses to load additional information about a changelist (e.g. files checked out, author, time created).

The purpose of the tool is to populate the description of a changelist with all required information in a format that is recognisable by the Perforce Trigger Handler, which is described later on in this article. The Perforce Changelist Tool makes use of a predetermined "specification", that was designed for ensuring that all subsequent changelists submitted into the repository had clear and concise information associated with them.

This "specification" ensured that the following fields were populated.

The tool made use of C#, WPF, and various other third-party libraries for UI controls and styling. In addition, the tool made use of toast notifications for notifying the user when an operation completed, and presented progress information in the task bar.

As stated, the console application performs a series of checks including:

Before another user can submit code into the repository, it's important that existing build breakages are resolved otherwise subsequent commits to the code repository could worsen the state of the build. If the user submitting the changelist is not the one considered to be responsible for breaking the build, then the user will be prevented from submitting their changelist until the build goes green.

This ensures that existing build breakages are urgently resolved, otherwise there will be a blockage in the pipeline.

This a simple check that ensures that there is no one outside of working hours that is submitting changes into the repository, and that there's no possibility that the build will fail before people arrive at the office the following day. 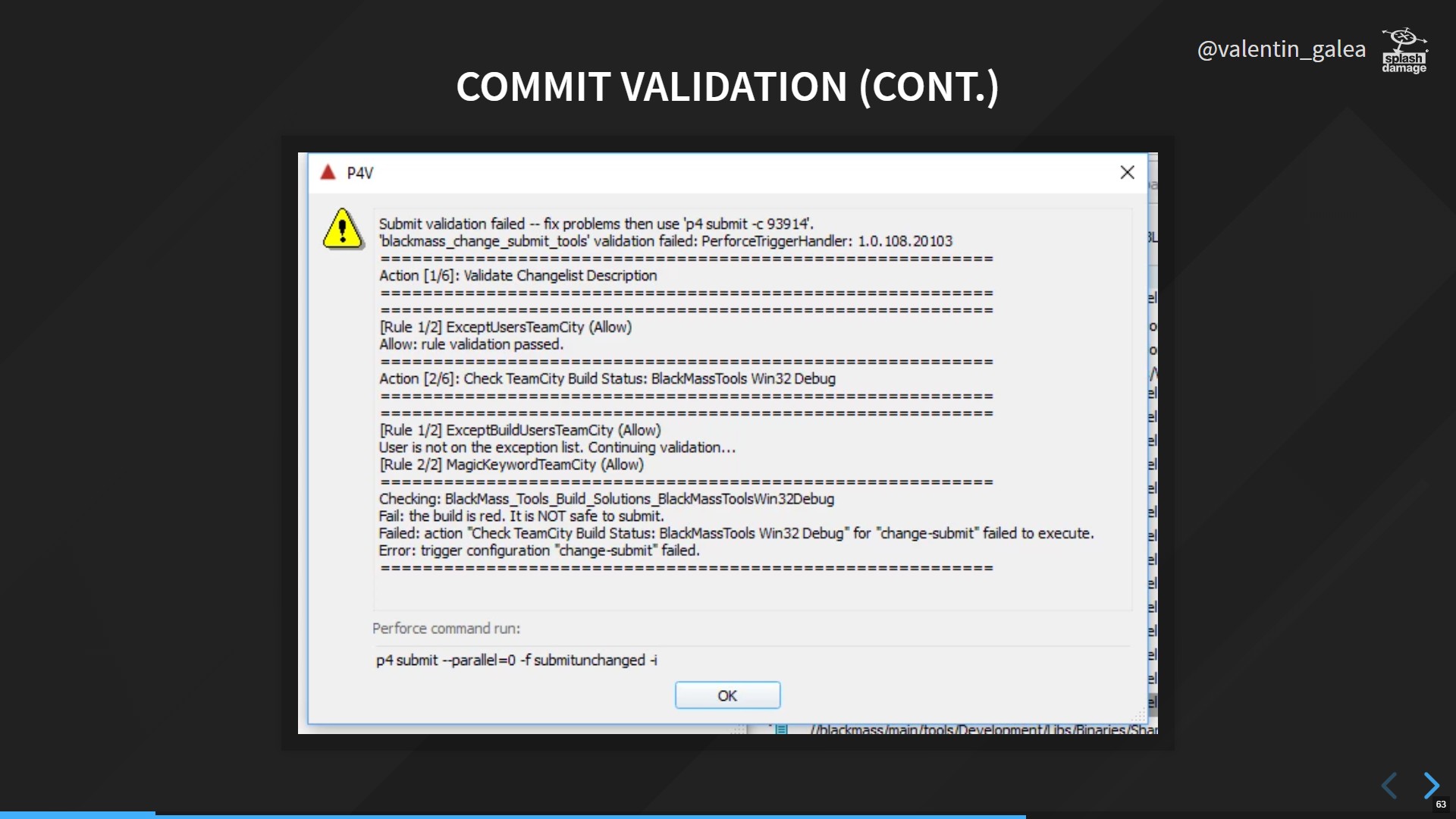 The message presented to users through P4V if their changelist was considered invalid. The output seen in the image is produced by the Perforce Trigger Handler, a server-sided console application responsible for performing validation checks against the changelist beign submitted.

The decision process for submitting the changelist looked a little like this.

The above diagram encapsulates what happens when a changelist is submitted to the Perforce server.

Personal build pipelines are an extremely powerful tool, but they likely will not suit everyone's needs.

Of course, the biggest issue with using such a pipeline is that it significantly reduces the speed of iteration across the team. Now, the team must successfully complete multiple steps in order to be able to submit a change into the repository.

There are some instances where this is a hindrance more than a benefit.

With the usage of a specifically configured "magic" keyword, it's possible to enable for the Perforce Trigger Handler to ignore performing all checks before allow a changelist to be submitted to the repository.

There is of course the possibility that such a "magic" keyword could be abused by members of the team, which is why it was imperative for the Perforce Trigger Handler to send out email notifications to team leads each time this particular keyword was used. This was simply to ensure accountability, and so that changes that were submitted using this keyword that were considered problematic can be accounted for (and reverted if necessary). 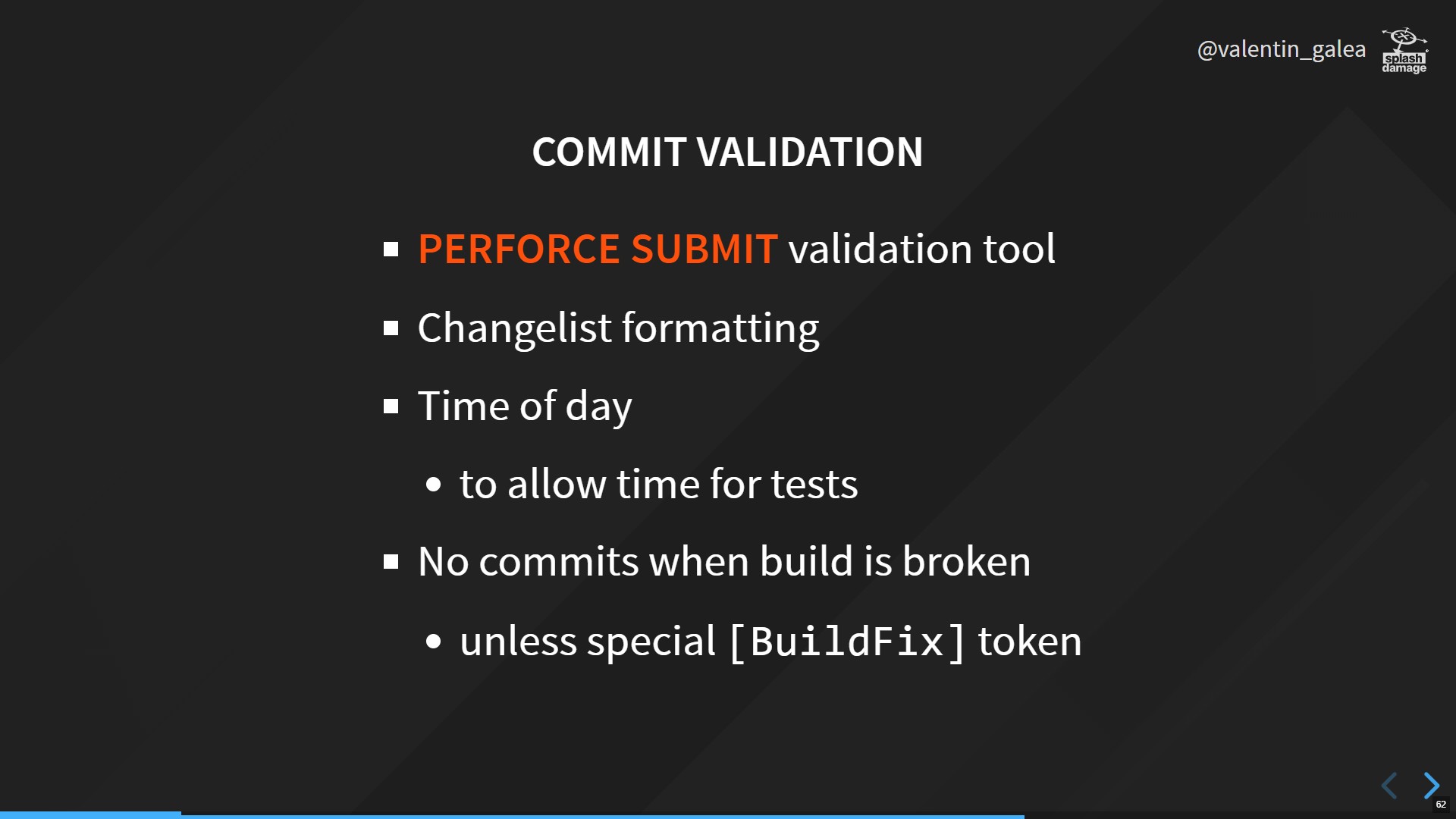 Splash Damage makes use of a special "[BuildFix]" keyword found in the changelist description to get around the Perforce Trigger Handler's preventative measures.

As stated in the presentation by Splash Damage, allowing for personal builds at any time of the day, and launched on request by any development team member, means that there is an significantly increased demand on the "build farm" (i.e. systems dedicated for doing nothing other than build the game). Therefore, it's important that there are sufficient build machines made available if a personal build system is adopted, and that those build machines are placed into separate agent pools from the ones dedicated to "mission critical" build type configurations (i.e. ones that must run on a regular basis, or at a particular time of day).

This then ensures that "mission critical" build type configurations will continue to run uninterrupted (and not placed in queues) at any time of day, or whichever time of day that they are configured to run.

Having a personal build system available to a large-scale development team is an invaluable asset when it is integrated correctly. The fundamental goal is to ensure that a development team can continue to work at a fast and regular cadence without hindrance, and without compromising on the quality of the "product" they are delivering.

Whether or not you wish to integrate a personal build system with your team depends on a few things.

It's important to note that if you do not provide adequate user-friendly tooling around this system, then you will very quickly frustrate and demoralize members of the team. This is understandable, as you are expecting them to adopt an otherwise contrived workflow for results that may not be immediately clear. If you expect users to perform additional steps before submitting their work, then be sure to do as much as you can for them, and with minimal interference.

Here's what each of the tools in the pipeline did for the user to mitigate confusion, frustration, or the amount of time required to read documentation.

Typically custom tools configuration are typically stored on the user's machine at the following path.

It's a simple XML file that any external tool can simply inject values into, providing that the changes made compliant with the XSD (XML Schema Definition).